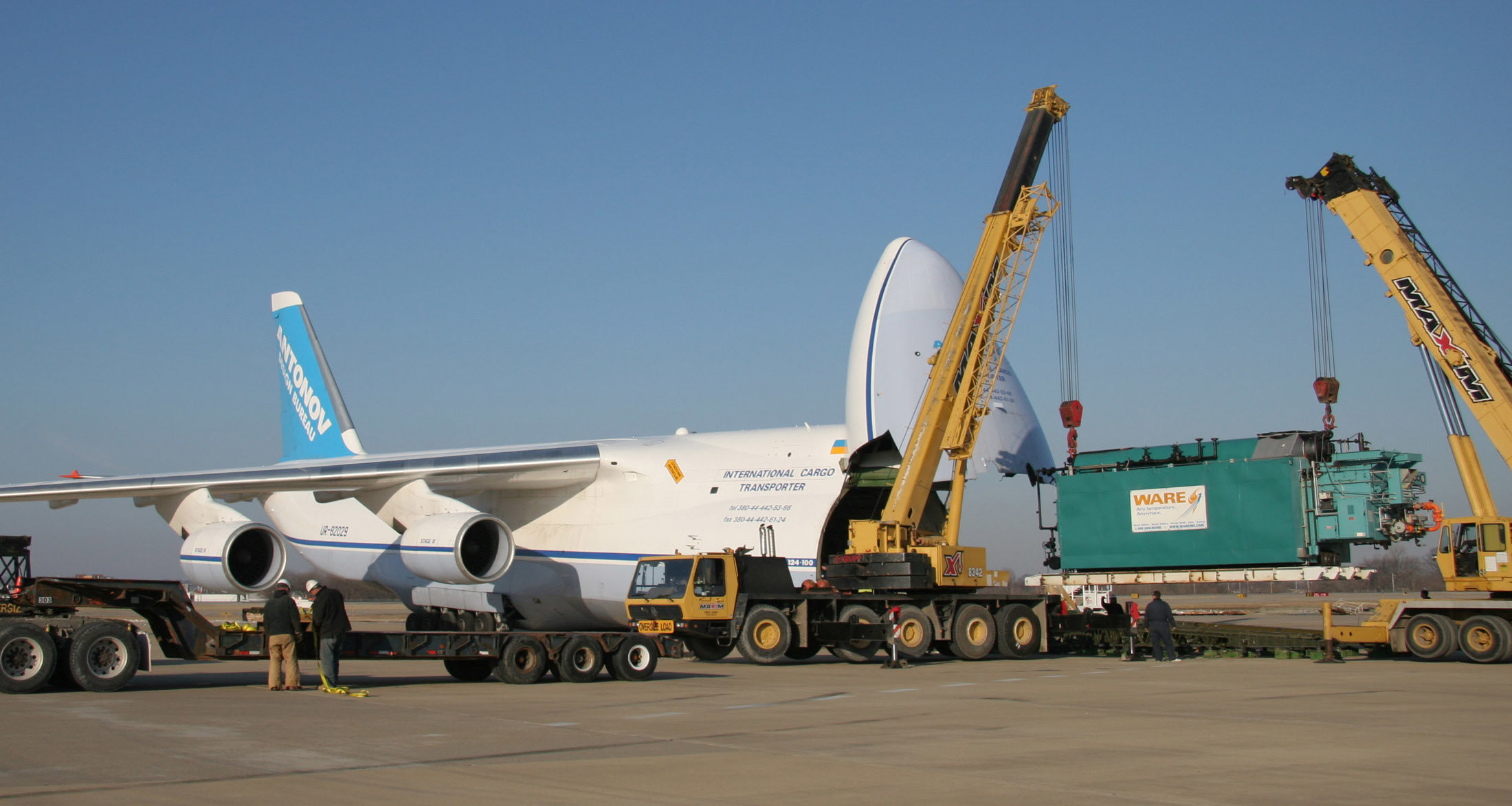 Each of the boilers weighed the equivalent of a dozen elephants and was the size of a small house. Using typical road or rail transport would have taken five weeks or longer. Ware delivered the huge boilers by air in just five days. But it wasn’t easy.

The call came Feb. 16. Irving Oil in St. John, New Brunswick, needed two boilers fast. Four of the refinery’s high-pressure, super-heated boilers required repairs and were out of commission. The Refinery required backup boilers to generate steam.“It would take two to four weeks just to get the permits to ship a boiler by truck,” said Steve Taylor, Ware’s director of sales. “We just thought, what can we do to make this work? Then we had the idea of getting a really big airplane.”

How big? WARE officials suggested using an Antonov 124, one of the biggest cargo planes in the world, which was originally designed to transport military tanks. The next day, Irving Oil agreed.

WARE arranged for one boiler to be loaded in Birmingham. Locally, the company contacted Edwards Moving and Rigging, a Simpsonville company that specializes in heavy moving. Edwards contracted with the England-based owner of the Antonov 124. Atlantic Aviation in Louisville was hired to facilitate loading the boilers.

“Our work is moving very heavy items,” said Edwards’ safety risk manager Danny Cain. “But the challenge here was the urgency. There was an enormous amount of logistical planning, from getting the plane, to security at the airport, and it had to be done exactly right and fast.”

The plane and movers were hired, but the challenge had just begun. The boiler frame was too big for the plane. So a WARE crew of eight welders and fitters worked nearly around the clock all weekend to build a smaller boiler frame. Even so, it would be very tight fit.

“If we were off by just a couple of inches, it would all be for nothing,” Taylor said.

The boiler on its new frame was loaded onto a truck at WARE. At 2:30 a.m. Feb. 21, it began its two-hour, 6.7 mile trip to the airport, escorted by local police. Workers walked beside the boiler, lifting phone lines with special poles to allow clearance.

At 4:30 a.m., the 19-man airplane crew began the exacting, two-hour job of constructing a special ramp system for loading the boiler on the plane. The boiler from Birmingham had to be moved to make room.

Finally, it was time to load the second boiler. It was carefully winched up the ramp, and workers began lifting the airplane’s interior insulation in hopes it would fit. To everyone’s relief, it fit perfectly – with just 1 ¼ inches to spare.

“I was never 100 percent sure it would fit until I actually saw it go in,” Taylor said. It is believed to be the first time two boilers have ever been transported by plane.

But the challenges weren’t over. The plane required 9,150 feet of runway, longer than any runway near the refinery. So the plane flew to Halifax, Nova Scotia, where both boilers were loaded onto trucks and transported 250 miles to the refinery – a trip that took nearly nine hours.

“We’re extremely appreciative of Ware’s dedication,” said Gary Bischof of Irving Oil. “It was a project of great magnitude, and they delivered.”