Modulating Feedwater Valves: The Method Behind the Movement 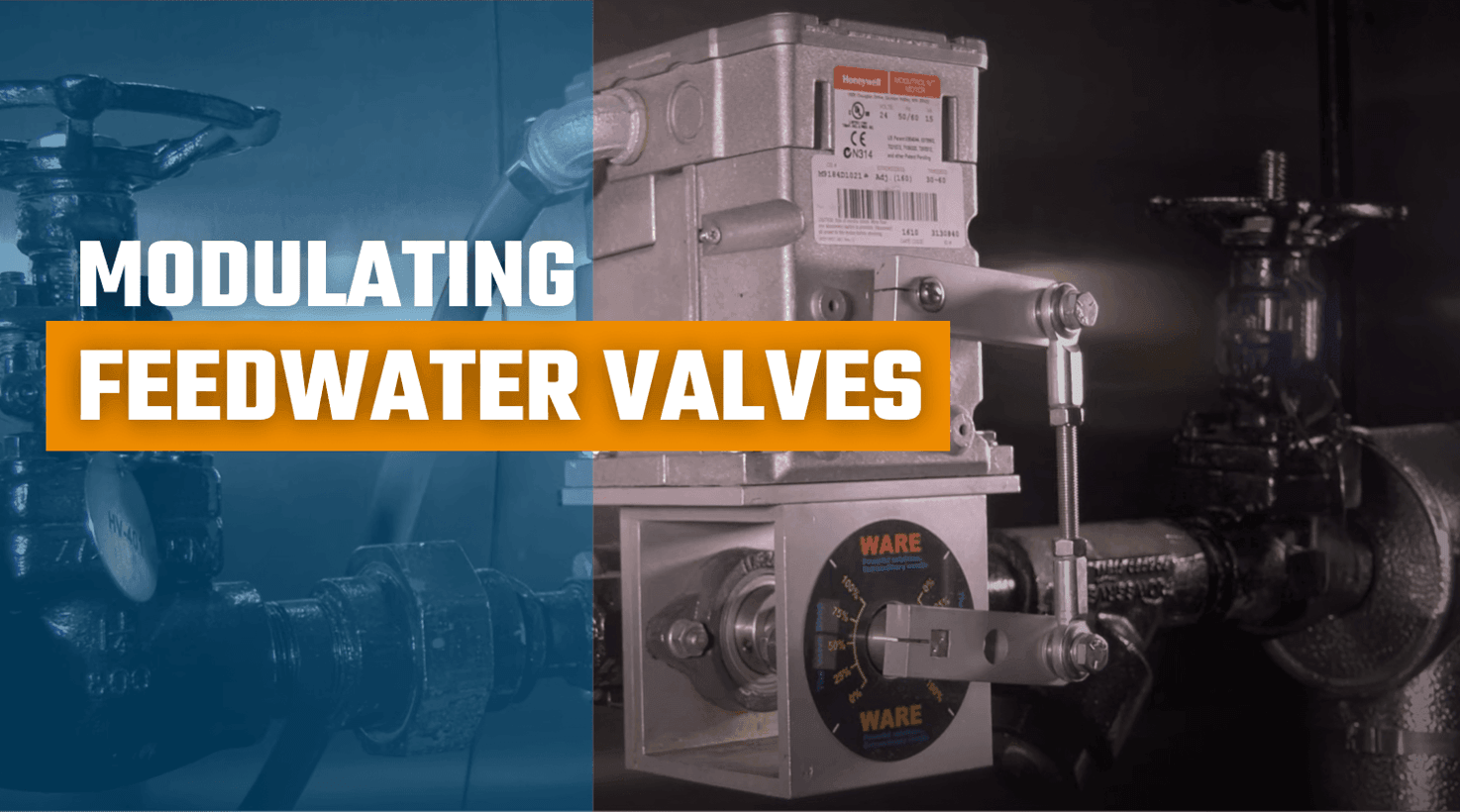 The WARE Mod-V modulating feedwater valve was developed to answer an industry need for greater control, efficiency, and performance in larger boiler systems. It’s a smart solution that’s showing up in more and more of them, and for good reason. With properly modulated feedwater, a boiler can operate with better efficiency, and be able to respond to shifts in demand without appreciable lag. That can be a game-changer.

To keep a boiler system operating at optimal efficiency, it needs enough water to do its job. However, the definition of “enough” changes throughout the day as demand for steam increases and decreases. This is called “load swing”, and different boiler systems use different methods to compensate for it. More and more, the flow of supply water is being controlled through the use of modulating feed valves, and there are a lot of reasons why.

Since smaller boiler systems typically don’t have to adjust to large load swings, they often rely on simple float-based systems to keep the water coming. In these “on/off” setups, when the water gets low, a float switch activates a pump or series of pumps. Once the demand level is satisfied, the float rises, the switch closes, the pumps shut off, and the boiler continues with business as usual. It’s not terribly complex, but it gets the job done.

Larger boiler systems typically experience much larger load swings that smaller systems. Consequently, they require greater and more frequent adjustments to the volume of supply water. Because the water demand can be so great, most larger boilers typically require a continuous supply of feed water to prevent a dangerous low-water situation from developing during peak use.

The all-on/all-off nature of a float switch means it really isn’t an option for continuous supply. Furthermore, float switches can’t really respond to demand in real time. If the water level gets too low, there’s going to be a lapse in supply as the float switch and pumps get their act together and replenish the feedwater.

In order to keep up with changing demand while simultaneously preserving system performance and efficiency, the feedwater supply has to be able to change quickly and precisely. Enter the modulating feed valve. With a modulating feed valve, the boiler control system responds to increased demand by signaling the valve to open in small increments, letting in just enough water to keep up. When demand levels off, the valve holds its position. Then, as demand decreases, the control system tells the valve to gradually close to compensate. Modulating valves can use one of several methods to regulate the flow of water. They can also use several different methods of actuation to move them.

Some modulating feedwater valves use gate valves. Just like the name suggests, a gate valve has a metal gate inside that slides back and forth perpendicular to the flow of feedwater. The more it slides across the valve body, the less feedwater passes through. Because the gate isn’t linear with the flow of water, this design doesn’t offer the same level of precision modulation as other designs. It’s also more prone to seat leakage over time.

Some modulating feedwater valves use a ball-valve design. In these valves, a solid ball or sphere is mounted inside the valve body. The ball or sphere has a hole running through it in the same longitudinal axis as the water flow. As the ball turns on its lateral axis, the hole rotates into or out of linear alignment with the water flow, letting more or less water through.

Other types of modulating feed valves use a globe valve, which features a disk or globe presses against a corresponding valve seat on the other side of the valve body. As the globe and seat move farther apart, they let more and more water pass through. Because globe valves operate parallel to the water flow, they allow for greater precision in the regulation of feedwater.

The valve type that WARE chose for the Mod-V valve, however, is the modulating V-port ball valve. Inside, a sphere is mounted in-line with the flow of water. That sphere moves against V-shape insert and rotates into and out of position to let the water flow at a desired rate, or seal the flow off entirely. Modulating V-port valves have several advantages over other types of valves, all of which make it the ideal solution for feedwater control. Modulating V-port valves offer a lower pressure drop when they’re operating, allowing water to flow unrestricted. However, when they’re shut off, modulating V-port valves provide a bubble-tight seal that prevents water leakage even when sealed for a long time. Because of the way they’re designed, they also permit easy shutoff even at high pressures.

When a modulating feed water valve is installed in a functioning boiler system, it doesn’t really make sense to have someone standing there turning the handle every few seconds to match feedwater demand. That’s why most modulating feedwater valves are controlled automatically, by modulating motors. Just like the name suggests, a modulating motor has the ability to move to any position in its full range of motion and hold there. This makes them ideally suited to open and close the modulating valve based on real-time demand requests sent by the boiler control system.

Modulating motors may be powered pneumatically or electrically, depending on the force needed to turn the valve, and the voltage or air supply available in the boiler room. Incidentally, electrical modulating motors typically operate with a 4-20 mA or 0–135-ohm control signal. To make sure the modulating motor and valve work together like they’re supposed to, modulating motors are calibrated according to range of motion, called “stroke”, and modulation speed. Feedwater valves should always be properly sized based on the boiler size, the operating pressure of the boiler, and the supply pressure and flow of water through the piping and valves. WARE can help with proper sizing so that your boiler system is matched to your unique processes and demands.

When it came to choosing a modulating motor to link to the Mod-V modulating valve, WARE went with Honeywell. Not only are they robust, reliable, and accurate, they’re also a widely available industry standard part. WARE has been in the boiler business a very long time. When they release a new piece of hardware, it’s a safe bet that a lot of thought and expertise went into it. That’s the case with the WARE Mod-V modulating feedwater supply valve. It’s built well, with extremely high-quality materials, and very tight tolerances. And it’s built to offer every feature it takes to get the most out of a boiler system. If you would like to learn more about the WARE Mod-V modulating feedwater valve, or have one installed, please contact WARE today.