Steam In Cinema: The Shining 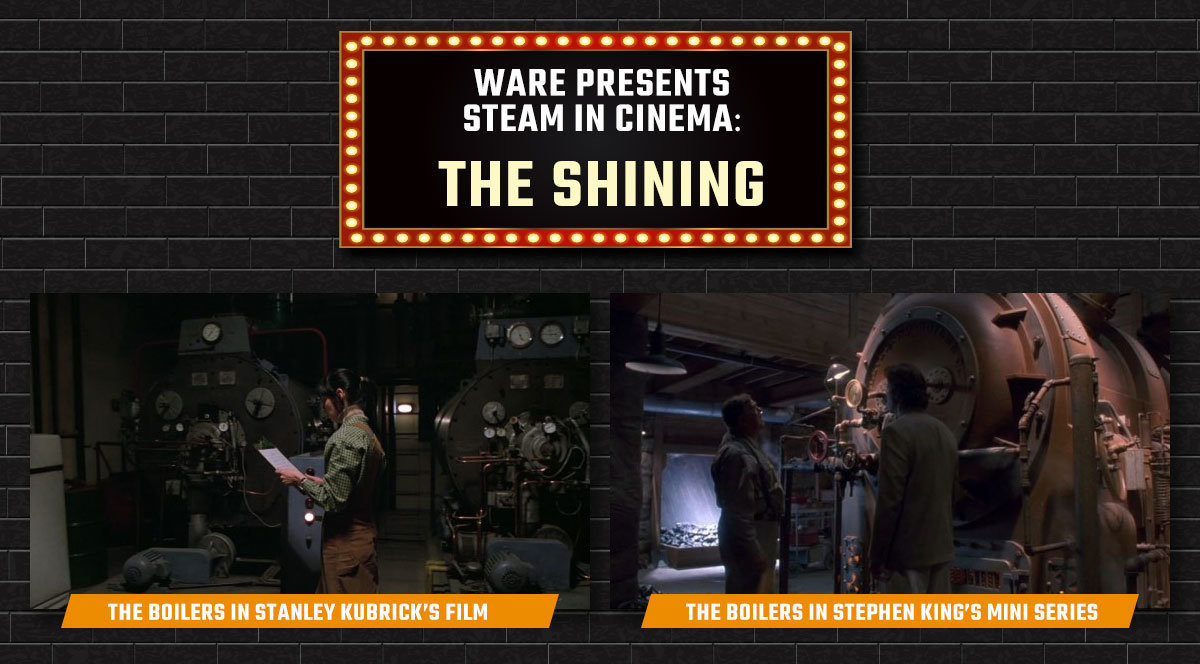 When watching a movie, we all have that special something that triggers our interest. For instance, a car enthusiast recognizes classic cars and any nuances of their modifications. The fashion-minded are prone to identify the watch or sunglasses that James Bond is sporting. Here at WARE, we tend to notice boilers (more than we would like to admit) when they show up outside of our normal work environment, and the silver screen is where they tend to do this the most.

Steam has played a role in many feature films over the years, including the classic horror movie The Shining. You remember, it’s the movie where Jack Nicholson’s character (Jack Torrance) uses an axe to chop an opening in a door and sticks his face through before saying those immortal words, “Here’s Johnny!” The haunted Overlook Hotel tries to persuade Torrance, a man with a history of abuse and drinking problems, to murder his wife and telepathically-gifted son.

Stanley Kubrick’s film certainly has its fair share of unforgettable scenes, but it strays from the book in some key details. In fact, Stephen King was so displeased with the dissimilarity between his book and the movie that he actually went back and re-made the story as a television miniseries.

In Kubrick’s version, Jack Torrance is ultimately turned into a human icicle after freezing to death in the snow, and the haunted hotel lives on. But did you know that in the original story, Jack perishes in a boiler explosion?

We only briefly see two boilers in Kubrick’s film, though there was only one in the book. Jack's wife Wendy is shown monitoring them, and they appear to be fairly modern, but ultimately they do not feature in any significant role for the duration of the movie. In Stephen King’s miniseries, on the other hand, the boiler is a critical part of the story. Supposedly the boiler is very old and has a malfunctioning relief valve, and if it is not manually dumped on a daily basis, it will build enough pressure to explode and destroy the Overlook Hotel.

As you can see, the unit they feature looks almost alien compared to modern designs: The boiler serves as a metaphor for Jack, as his madness is like the pressure on that boiler, slowly building and building, rising to dangerous levels before it ultimately ends in a catastrophe. As you have probably guessed, his maniacal pursuit of his wife and son distracts him, and he forgets to relieve the pressure, ultimately bringing about his doom and the destruction of the evil hotel.

Aside from the story, it serves as a firm reminder to mind your equipment and address safety issues immediately—if maintained and operated properly, scary boilers should stay in scary films. The next time you are out at the movies or watching TV at home, see if you can spot some steam in cinema! For those who are curious, Stephen King’s inspiration for the book—as well as the filming location for both the movie and the miniseries—was none other than the Stanley Hotel in Estes Park, CO.