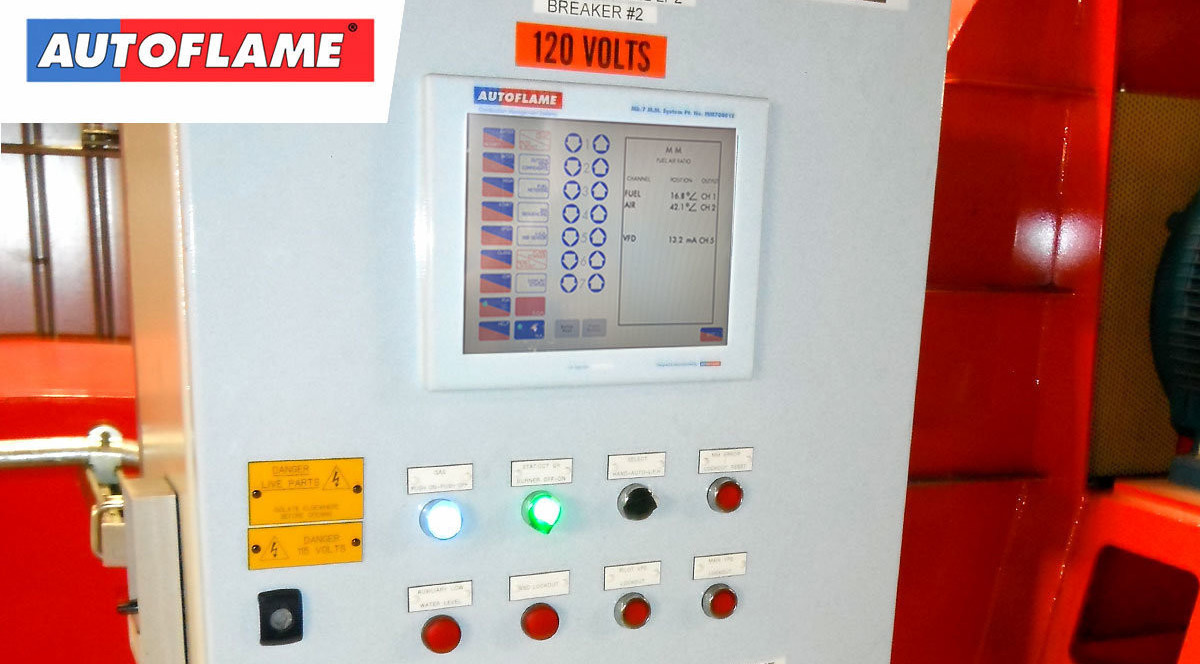 Autoflame​ is a pioneering manufacturer of burner management systems that reduce oil and natural gas consumption, boiler house emissions and labor costs. As a proud Autoflame rep for over 20 years, we’re devoting this blog to this innovative system of combustion management controls. We’ll start with a little history and then offer an overview of the features that make this system so appealing and cost-effective.

A relatively small company when it was founded in England in 1968, Autoflame has grown to become a world leader in boiler monitoring and emissions reduction technology. When microprocessors were introduced in the 1980’s, Autoflame was one of the first companies to replace physical linkage and jackshaft systems with this new technology. This patented intelligent burner control system gives the boiler exactly the right amount of fuel and air to run as efficiently as possible with minimum emission, and shaves 8%-12% off fuel costs on average.

Unlike traditional linkage mechanical systems, the Autoflame is a parallel position microprocessing system that controls multiple motors independently for different fuels in the air damper for a more precise and accurate control of the system.

Autoflame’s systems have evolved over the years, and today’s Mark 8 boasts an easy-to-use interface that many have compared to an iPhone. Unlike the clunky black boxes associated with linkage system controls, Autoflame’s touch screen gives users a vivid graphics and management of their boiler’s combustion system.

Almost half of all Autoflame controllers sold are installed on older burners (i.e. rotary cup burners, Webster, Powerflame, and almost any burner that mixes fuel and air) to increase their efficiency as much as is physically possible.

It is important to note that Autoflame is not a PLC system that requires you to do the programming, but an options and parameters system—the framework is built, so you choose the different elements and the way you want them to function.

For a typical process customer with dynamic changes in loads, linkage systems had to be tuned up on a monthly basis, as the mechanics required routine adjustments, without which combustion efficiency would greatly decline. In comparison, Autoflame controls typically require only quarterly safety checks.

The 3-Element Feedwater Control is especially appealing to process applications with big load swings. Such variance in loads causes an initial pressure drop that creates a rise in the water level on the boiler, which signals the feedwater valve to close. This is problematic as it creates an artificial swell in the boiler. The 3-Element Feedwater Control monitors pressure, water level and firing rate, so it automatically resets the water level to keep the valve open and everything up and running productively.

Not only does the Autoflame make your burner more efficient, but it makes it safer as well. The controller is error checking 50 times every second to ensure safe operation, which some have compared to having a technician on site. Add Autoflame’s Exhaust Gas Analyzer, and you can trim the gases to maintain perfect combustion.

With an over 20-year partnership, WARE is a certified Autoflame representative and offers turn-key installation and comprehensive training.​ We’re happy to answer ​any questions​ you may have about this remarkable burner management system for both commercial and industrial applications.