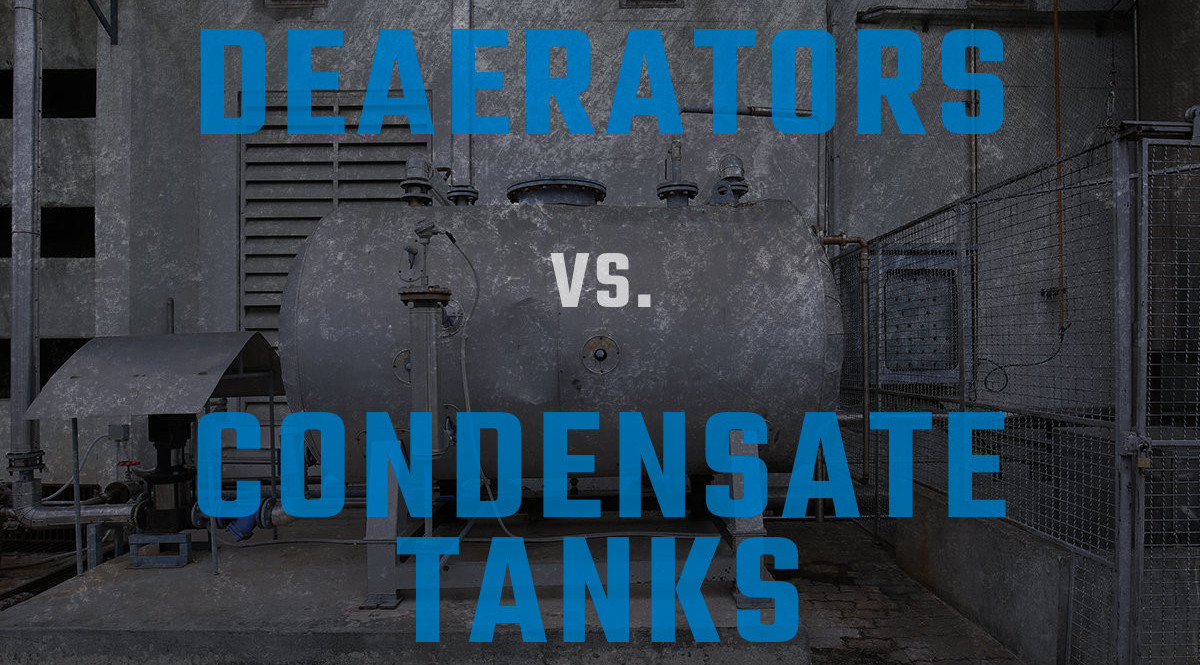 Deaerators and Condensate tanks are both used to preheat a boiler’s feed water system and remove the oxygen from the water. As you know, water is very corrosive to metal components in a steam system as it causes pitting of the boiler and can destroy the tubes. To protect against this damage, it is crucial to remove as much oxygen from the water as possible. How the oxygen is removed varies from system to system.

The Deaerator system preheats the water and then uses feed pumps to boost the pressure of the water and then pumps it into the boiler. As the boiler steams it off, more water comes in and continues this cycle. The typical temperature inside is 220 to 230 degrees Fahrenheit (225 to 227 degrees is ideal). The Deaerator features a modulating feed valve and a slide switch with a float inside that sends a signal to the mod motor which keeps water at the level you desire (typically the halfway mark).

When water is introduced, it drops down through a spray head and the water comes out in a flash in a fan-shaped spray. Steam that has been reduced to about 5-7 PSI is introduced into this water, and this steam forces any oxygen molecules out into the top of the chamber.

The Deaerator system has a valve to vent this accumulated oxygen. You know those skinny steam pipes you usually see sticking out the roof of a boiler room? Those are likely the oxygen vent pipes. The steam from these pipes is not wasted energy, but simply the oxygen being vented safely outside.

So how does this compare to a Condensate system? Turns out that both function essentially the same way, but the Condensate tank handles oxygen extraction a little bit differently.

In a Condensate system, water is introduced into a chamber that has a solenoid valve (instead of the modulating valve seen on the Deaerator). There are two probes in the top of the Condensate tank; when water drops off the bottom probe it energizes the solenoid valve and then, when water reaches the top of the other probe, it shuts the valve off, which manages the fluctuation of water within the tank.

Like the Deaerator, a Condensate tank still uses steam to preheat the water, but it is introduced through a sparging system -- a stainless steel pipe with about 200 8th-inch holes drilled in at angles that shoot the steam into the water. This preheats the water to about 180-190 degrees Fahrenheit and eliminates about 95% of the oxygen. The remainder of the oxygen has to be removed with a sulfite chemical injection. This process creates a small amount of sludge which has to removed from the boiler during a daily blowout.

So, which system is the best solution for you? Like many decisions, it comes down to your budget. Condensate tanks are typically used on smaller systems and are less expensive -- Deaerator systems often cost three times more.

If you have a lot of soft water or makeup water, then you should really give the Deaerator system a hard look as it may be more economical in the long haul. Both systems do the important job of preheating the water. Remember, you never want to introduce cold water into your system as it would cause a shock that risks jerking tubes loose and causing all sorts of problems.

So the decision really boils down to your budget and how you prefer to remove oxygen from the water. Whatever you decide, remember the importance of proper maintenance as it directly affects the value, safety and longevity of your boiler system. For more information on this subject or for any of your boiler service needs, click here.